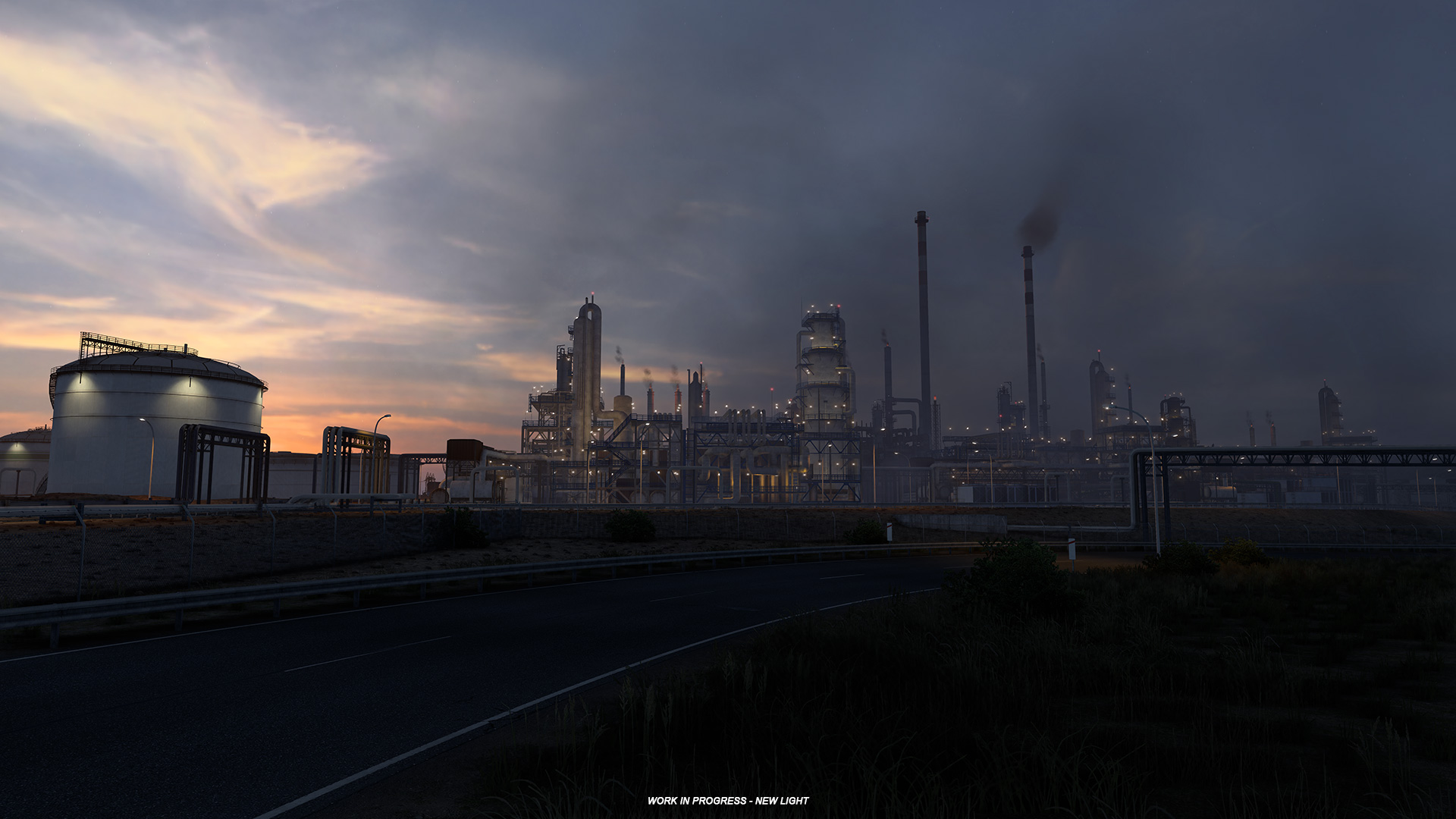 (screenshot taken at around 6 AM, at approx 39 deg latitude)

The Good News and the Mixed News

When we were making our plans for 2020, the world was a very different place. Our internal goals were very ambitious; we wanted to get through one of the most extensive technology changes in our engine since the release of Euro Truck Simulator 2, all the while not interrupting production work on map DLCs, new vehicles, and new game features. But then reality intervened. We have spent some three months working from home in the spring, shutting down our office for health concerns. After a couple of months during the summer that seemed to pass too quickly, we have once again switched to working from our homes in early September, and it looks like we may not make it back to our offices until spring 2021. 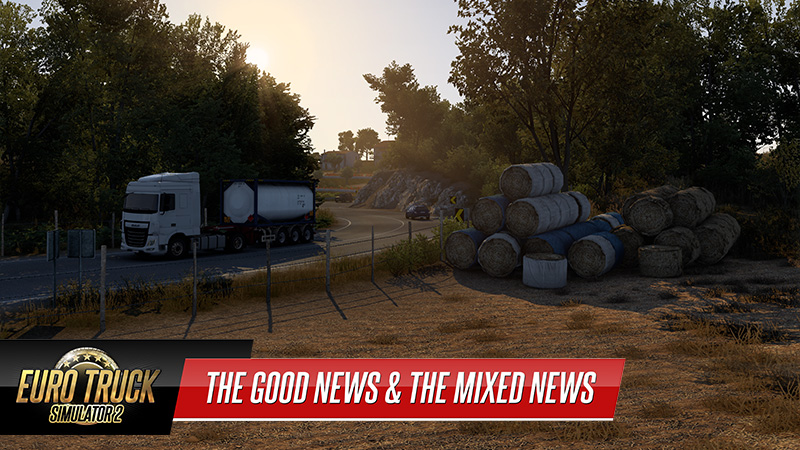 We have managed to keep our spirits high, we have managed to continue production and even hire new colleagues during these difficult times. But switching the teamwork to a distributed model was not without a price to pay – some of the projects are taking longer than we anticipated. We are doing our best to remotely coordinate and synchronize the effort of over 200 developers contributing to our projects, but you can imagine that managing the creative process in such a way is very demanding.

The good news is that we are on the verge of very visible improvements in how our games look. Working remotely, chatting over Discord, some of us using kitchen tables for lack of alternatives with the kids home-schooling for months as well, the team is pulling off incredible things. The second stage of changes to our lighting system is a massive project. Intensities of all the light sources in the games are now representative of real-world values, with the appropriate difference of orders of magnitude between the sun and the lightbulb. All internal rendering is fully taking place in HDR, with a series of post-processing steps during the camera exposure stage making sure that the result is crisp and believable. Whether you are under full sunlight, or in a dark tunnel, at sunset, or in heavy rain, the new unified system always makes sure to produce consistent visuals. As part of the rework, we have to touch up pretty much all game assets that we have created over the years, all the skyboxes, vegetation, rocks, buildings, all the vehicles, every texture, and of course, any related light hookup for that lamp on a loading ramp need to be manually adjusted for the new system. It’s an incredible amount of changes to the art, and man-years of work of our programmers to change the graphics pipeline, shaders, and tools, using all the tricks in the book so that we do not drastically increase the games’ technical requirements.

The not so good news is that we will not be able to wrap it all up before the end of the year. We have already committed to a particular trajectory, and now we have to stay the course until we reach the destination. And it’s time to go ahead and rip the band-aid off – Iberia DLC for Euro Truck Simulator 2 will not be out this year. Our fans have no doubt got used to the pattern that we have managed to keep in recent years, and you can bet that we have tried as hard as possible to stick to it once again, and get you a new map expansion in December. The scope and scale of Iberia production were challenging even for a normal year, but even with over 20 map designers working full-time on the DLC, this year proved to be too much. We have found ourselves with the timelines of Iberia and the new light project colliding and realized that there was only one proper way to sort it all out. We had to base Iberia on the new light system to minimize long-term complications for future game updates and production.

We have managed to release Colorado DLC with the current light, and there are some not-so-small additions about to be unleashed from our production pipeline soon, still based on version 1.39. However, both ATS and ETS2 teams are now full steam ahead in reworking and retooling all the models and textures of both games, with no chance to release more updates on legacy code and assets. Iberia will be our first major release to benefit from the new light at launch. Before that happens, Update 1.40 will actually bring new light to both our games, changing the way they look thoroughly; base game content as well as any DLCs.

Iberia was not the only internal project affected by the need to unify the development cycle. The team reworking Germany is reporting major progress as well, but they too have to wait until we stabilize the changes in 1.40. See the images below.

Inevitably, we have to brace ourselves now for the big question – when are we going to be ready to release Update 1.40, when is Iberia coming? As has been our mantra for years, we are going to make sure things are solid before we get a new update out. Our best current estimate is that we should reach a closed beta of 1.40 in January. Closed beta takes a while to iron out any problems that we manage to catch ourselves. We will definitely need to spend some weeks in open beta after that, to make sure all potential issues are spotted and addressed, and to give a chance to mod makers to catch up. We do not like to commit to a particular date until we are pretty much sure we can make it, but if you do the math, we are looking at a late-Winter timeframe, hopefully still in the first quarter of 2021.

We were very careful not to communicate any promises of when Iberia would ship, but we understand that some of you may be sad or disappointed not to see a new ETS2 map expansion to pass the winter with. We apologize for the long wait that we are asking you to endure. But ultimately, we are sure that this is a healthy decision for the long term viability of our games. There are map teams working on yet another generation of map DLCs for both ATS and ETS2 already, and they too need to be sure to work on a well-defined code base and asset base. Everybody will benefit after we reach the new stable build, we just need to push through to reach it.

We are going to keep showing you more of the changes that are on the horizon with the new light, there will be more screenshots, we actually plan to show you some moving pictures of Iberia with new light enabled very soon. It may be a bit buggy yet, we are not through with the process by far, but we feel that we need to communicate how promising it is already.

Hopefully, the screenshots we are sharing with you today are proving that the changes are really worth it, that the new looks, and the new content and map updates, are really something to look forward to. Rebasing all lighting on the new system is a crucial step. Among other things, it will allow us to present a wider variety of weather conditions and more epic HDR skyboxes. But it’s not the end of the road, it’s only a milestone. Our programmers have more internal projects underway for additional engine optimizations and speedups, and we expect to see more improvements over the next year. Reaching the new stable point of version 1.40 will allow the art department to pursue their vision of a fully PBR-enabled pipeline in the future, so the visual quality should and will keep on improving further.

It’s been a hard time for both us and the community, and we are not yet through. Your continued support over the years gives us the motivation to keep pushing the game to the new frontiers with each update and DLC. We would not be here if not for all of our fans. Thank you for your patience. 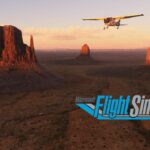 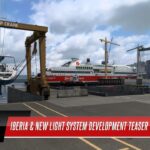